My first injection-molded plastic model kit was an X-wing fighter made by Revell. I recall my father and I assembling it together on our front porch one summer day. We gathered the necessary tools as if we were chefs preparing our mise en place: the orange tube of plastic cement, toothpicks to dab it on the molded seams, small metal files, X-acto blades, enamel paints and tiny brushes.

We opened the kit and unfolded the instruction sheet. Each exploded diagram apportioned the work of assembly into logical steps and he and I dutifully followed them in order. As we laid the last decal into place, we compared our model to the photograph on the kit’s box. Except for the less-than-perfect paint job of an impatient 7-year old’s hands, the X-wing we constructed together was a close match. A replica any aspiring rebel pilot would be proud of.

I attribute at least part of my decision to become an architect to these experiences building scale models as a child. It’s difficult to articulate the allure of the miniature, but in the process of model-making I found a combination that ticked all the right boxes: there were precise drawings to interpret, exacting details to install, painting, weathering, gluing, and dedicated time spent with my father. The finished models were objects of pride, which I displayed as an athlete might: trophies of a (rather nerdy) set of skills.

As a child, I was content to read the kit’s instructions and follow them precisely. I wanted the image on the outside of the box. The model kits were like pantographs promising a predetermined, aesthetically-accurate result; one I could envisage Luke making the trench run in to destroy the Death Star.

As I grew older, however, replication wasn’t enough. I wanted more. That’s when I discovered kitbashing. Kitbashing is an organic process which hybridizes pieces from several model kits “bashing” them together. Perhaps not coincidentally, it’s the process the original model-makers used to create many of the original ships in Star Wars. There are no rules, no instructions, no methodology for assembly, no decals. The very point of kitbashing is to disregard the imagery on the outside of the box and create a chimera, something that’s never existed in the world.

Kitbashing is an organic process which hybridizes pieces from several model kits “bashing” them together.

The discoveries one makes while kitbashing unfold in unpredictable ways as new pieces are tested, new lines are scored, plastic is added or subtracted, Booleaned, retooled, sanded, sculpted, shaped, and ultimately something completely novel emerges. It’s a tactile sort of alchemy.

As a designer, an architect, and entrepreneur I’ve adopted kitbashing as a template for building my business. It’s helped me design my practice and experiment with new means of supporting the work I want to do and the life I’d like to live. Although the details of kitbashing are as nuanced and numerous as there are model kits in the world; two simple precepts form the foundation of kitbashing:

From our earliest days of childhood, we’re indoctrinated in the procedures of rule following. I happily followed the rules set out for me in school (most of them anyway). I recall a test in primary school which began: “Read through the entire test before answering any questions.” Of course I quickly dismissed the opening instruction knowing that reading through the test would waste time and prevent me from finishing before my peers. So I proceeded to answer all twenty questions before arriving at the last line which read: “Put your pencil down, you don’t have to answer any of these questions.”

Our educational system and cultural wisdom suggests that good things follow for those who obey instructions. We’re rewarded with the replica X-wing as the box has promised. Attending architecture school opened my eyes to the true power of kitbashing and when not to follow the rules. I honed those skills each day in the studio. I was taught to reexamine every preconception, every historical precedent; I was encouraged to make every move authentic, novel and thought-provoking. To replicate was heretical and lazy.

Attending architecture school opened my eyes to the true power of kitbashing and when not to follow the rules. Yet looking back, it’s surprising how quickly I jettisoned those kitbashing skills with respect to my life and career after graduation. I had living expenses and debts to repay. So I did what my parents did and those who went before me in architecture school did: I went to work for someone else.

Attending architecture school opened my eyes to the true power of kitbashing and when not to follow the rules.

I followed the instructions, which began with school, moved on to graduation, which led to internship, and on to licensure, then to project architect. As I approached my 40th birthday, I had set my sights on becoming principal.

At the time the instructions made sense to me. Certainly my parents couldn’t offer other narratives. As baby boomers, they had worked, 9-5 (often much longer) for a paycheck, for a promotion, for two weeks of paid vacation and ten holidays each year. School hadn’t posited any other professional narratives either. Novel ideas seemed to swirl about in the design studio, but the corollary in the one professional practice course my university offered was absent.

Architecture school promoted critical thinking and idea synthesis, concept generation and a strong work ethic. It exposed me to theory and history; physics, engineering, and materiality but it left me completely unprepared to kitbash the practice of architecture. Before me I saw one pathway to practice, and another to academia. So I chose the instructions that would lead to practice and joined the slow march toward becoming principal.

I marched for a long time, too long. Then I chose not to.

After reading the Four-Hour Workweek by Tim Ferriss, I indulged myself in every business book I could find. The subjects were fascinating and I was dumbfounded by the revelation that this information was completely missing from my education as an architect. To my surprise, it was every bit as satisfying and fulfilling as architectural theory had been.

I rediscovered kitbashing and finally understood that its principles could apply to anything, even business. Practicing architecture didn’t require that I replicate someone else’s instruction manual, or structure, or means of running a business. Everyone seemed to be trading hours for dollars. The corporate ladder was a ruse. I could climb all the rungs and be principal in a day if I chose to. I could select the work I wanted to do, the clients I wanted to work with. I could choose to never work with a client again if I wanted.

I threw out the instruction manual and began writing my own.

When kitbashing you don’t need permission to sacrifice the engine cowling. You just do it. You don’t ask whether gluing the fuselage to the landing gear makes sense, you try it. Kitbashing is a grand experiment, and failure fuels reinvention and discovery.

Seeking permission naturally requires someone with authority to make a decision. Kitbashing requires that you accept the mantle of decision-maker. There are no gatekeepers when kitbashing; no one will tell you, “yes” or “no.” The only one preventing you from deciding to move forward with a business idea, or writing a book, or starting your design practice is you. 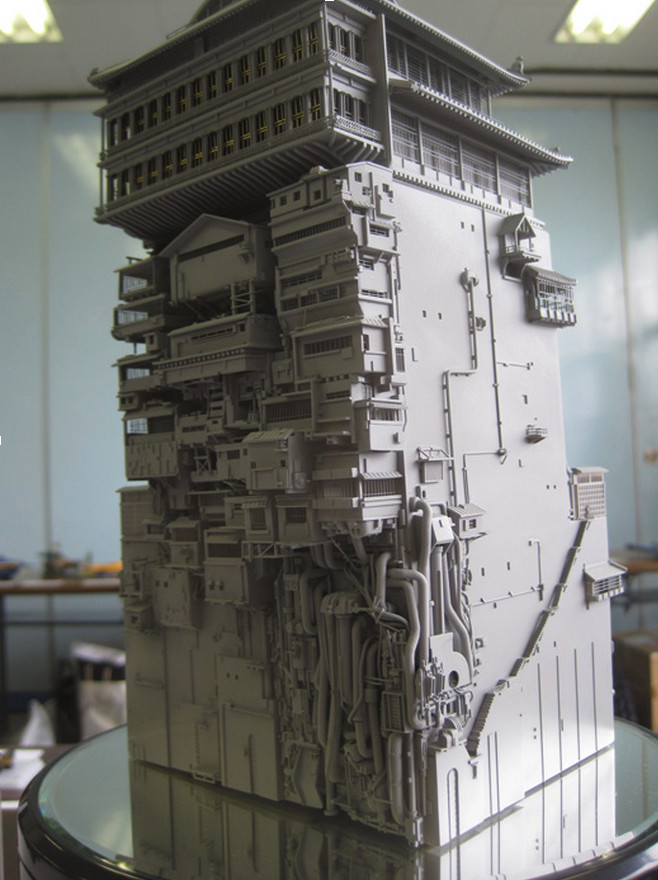 We live in a world defined by a multiplicity of possibility rather than predetermined outcomes. Permission was for your parents and grandparents to seek; you already have it. Use it to build something we’ve never seen. Don’t be afraid to kitbash, to make something ugly, something unique. Experiment. Build wealth for you and those around you while creating a life that brings you happiness. Design a legacy you can be proud of.

Permission was for your parents and grandparents to seek;

You already have it.

Building a business certainly isn’t for everyone. If you’ve been contemplating it and wondering if it’s right for you, know that the cost of inaction is high. It’s not always pretty and the glossy photographs may never come. But, building a business is among my greatest challenges, successes, and rewarding experiences in life (so far).

If you choose to build a business, the instruction manual you’ll write, the practice you’ll kitbash will no doubt be different than mine, but better for you. So jump in the game - challenge yourself to answer these questions as you move through your day today:

+Who wrote the instruction manual you’ve been following?
+Whose script are you reading?
+What things have you assumed to be true without experiencing them?
+What is the opportunity cost of the path you’re on now?
+What are you giving up by staying in a position of assumed comfort?
+Are you living your ideal day today?
+Right now?
+Are you doing work that brings value to the world?
+Are you doing work only you can do?

Architect and Entrepreneur: A Field Guide to Building, Branding, and Marketing Your Startup Design Business

Award-winning architect, Eric Reinholdt has built his design practice, 30X40 Design Workshop using the strategies outlined in a newly published book, the "Architect and Entrepreneur: A Field Guide to Building, Branding, and Marketing Your Startup Design Business". He has successfully transitioned from an employee to architect entrepreneur and continues to refine his brand message, help other architects build their independent practice and serve his clients all from a Longhouse he designed for his family on Mount Desert Island in Maine.

Architect and Entrepreneur: A Field Guide

Digital tools are vital, but sometimes in order to really understand phenomena we have to get a bit closer. That's where...